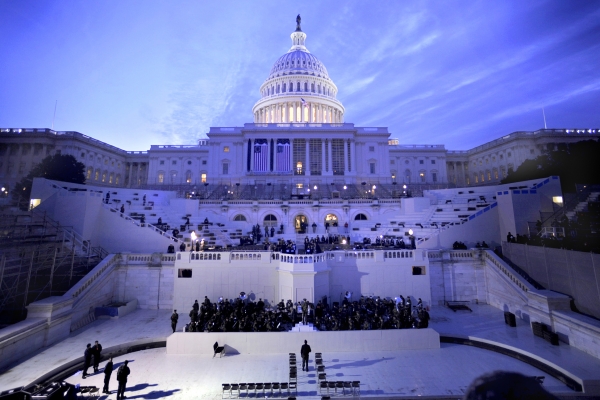 Today we stand on the threshold of a new moment in the life of our country. As we prepare for the transfer of power from one president to another, we have been invited to join in prayer with Christians across the nation for the incoming president and the nation's health.

As we pray, I believe it is important to reflect on the importance of faithful leadership in the lives of the faithful.

If you were to look at the history of the monarchy in ancient Israel from the books of First and Second Samuel, you would see that the rise of the monarchy in Israel was that nation's attempt to solve a theological problem. The nation of Israel, called by God to be a conduit of blessing to the world, had long-term issues of faithfulness. They interpreted their whole national history as a result of the nation's ability to be in a good and loving relationship with their God. Victories were equated with periods of great national faithfulness. Defeat a sign of the nation's infidelity to God. They believed that each citizen had responsibility for the faithfulness of the nation. Any weakness in the nation was attributed to the infidelity of its citizens.

As a result of this difficult history, Israel sought a political remedy - a king to rule over them whose faithfulness would be a sign and symbol of the nation's faithfulness. (1 Samuel 8) Early on, the prophet Samuel warned the nation that there was no short-cut to national faithfulness but that the king would likely rule out of caprice and self-interest at their expense. And that was true - especially of the first Israelite king, Saul. (1 Samuel 8:10 - 18) The second and third kings, David and Solomon, also had their own issues.

Samuel tells the people that the only way to achieve national faithfulness was through the faithfulness of every individual in the nation, not just the king.

I am reminded of this today because I believe that we are a nation that has placed perhaps too much trust in our elected officials. We have hoped that political solutions would address our moral and ethical problems as a nation. We have devolved our own agency to the government and its leaders much in the same way that the Israelites devolved their call to faithfulness to their king.

As a result, not only is our nation politically divided but morally and socially adrift. Economic inequality and unequal rights are everywhere evident and dramatically exposed in the last year. We are reminded that our vocation as a light to other nations is yet unfulfilled.

We have not been well served by those who seek power. Instead, I believe that we are being invited to embrace our own ability to act once again. We are invited to act in the best interests of our neighborhoods, our region, and our nation once again.

Congregations are called to be communities of conscience in our nation. As in the great struggles for the expansion of civil rights, communities of faith have an important role in building up our national moral consciousness. But, we have become short-sighted in our search for our own strength and health as inwardly-focused churches. We have been unable to speak with clarity grounded in our faith in God through Jesus Christ to the national challenges that have arisen again and again.

But, that can change if we embrace our calling to turn to God once again for inspiration, guidance, and courage. I believe that we all have a role to create the world that we long to see. I also believe that we cannot outsource our agency to those who seek power over us.

Over the past few months, I’ve been reading The Beloved Community: How Faith Shapes Social Justice from the Civil Rights Movement to Today, a book on the spiritual roots of the civil rights movement by Charles Marsh. One of the simplest, but most profound, parts of Dr. King’s work was his belief that his commitment to expanding civic participation and civil rights were both outgrowths of his Christian faith. He believed that communities of conscience in this nation had a vocation to call the nation to high moral ground, greater freedom, and greater equality for all her citizens. The state and those elected officials who govern in our name, he believed, are not perfect. In fact, the apparatus of government may not be perfectible, but that people of faith on a journey of faith had a duty to expand freedom and equality as a matter of faith.

So, on this eve of a new administration, whether you support the incoming president politically or not, let us remember that we have a significant role to play in our own country’s future and destiny. And, we succeed or fail as a nation together linked as we are in a common future.

But, first, I invite you to join me to pray for this nation on inauguration day. Pray for wisdom for our elected leaders. Pray for a rebirth of civic and national pride. Pray for strength to meet the challenges that lie ahead and pray for a new birth of common identity and civic virtue.
I hope you will join me.

COVID-19 has reminded us of a deep spiritual truth in these last many months, it is that we are "One Together." One in mission. One in service. One in prayer. One in praise. One together. Join us in supporting our church.

Give Make a Pledge More About "One Together" Altar Flower Donations