Family Friday - Music for Kids of All Ages 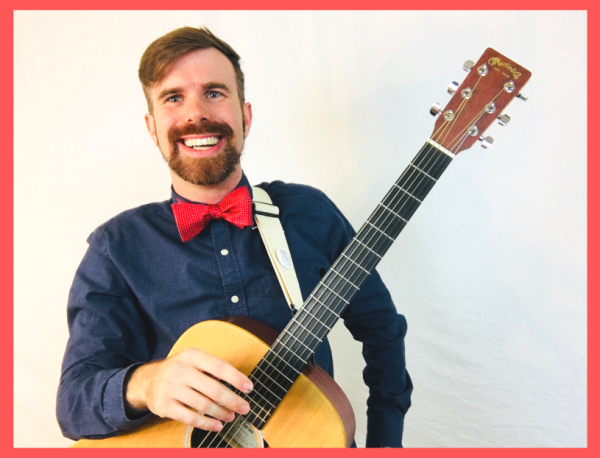 Join us for a concert and a potluck meal!

Will Parker is a children's songwriter and teaching artist who writes and performs music for "kids ages 1-100." During Will's whimsical and interactive shows, he plays guitar and harmonica and sings original songs that engage the audience in singing-along, dancing, high-fiving, and imaginative play. The kids even help Will create an improvised song through their suggestions and input on what should happen next in the impromptu story. Will also engages the kids in conversation about how every person can be creative and that writing a song is something they can do too. The kids learn that songs are a great way to tell stories--they’re own stories too!

Will holds both a Master of Arts in Teaching and a Bachelor of Arts in Theatre from Trinity University and served as the theatre director at KIPP University Prep High School for four years before leaping into life as a full-time musician. During the year and every summer, he tours the country playing shows at libraries, schools, daycares, museums, churches, camps and festivals. In 2017, he and his collaborator, Sam Fuller, recorded and released their full-length album, Animal Maniac. Check it here at willparker.bandcamp.com and or find it on all major streaming services.

While in San Antonio, he was deeply involved in improv scene where he performed with San Antonio’s first musical improv troupe, When Can Do. He also worked with the Magik Children’s Theatre as an actor in their touring troupe, a coach for their youth improv group and as a teaching artist for their X-celerated Theatre program for incarcerated youth.

Will has a passion for helping young people learn the self-love and confidence they need to unlock their innately creative selves. Last year, Will felt called to pursue his mission in a new direction--by going to seminary. He is currently attending Yale Divinity School where he is involved in Yale Divinity Drama, Yale Divinity Interfaith Club, and Berkeley Divinity School--the Episcopal seminary at Yale. As he discerns a call to school chaplaincy, he continues to perform music, facilitate workshops, give talks, and teach young people through the arts. Deeply inspired by Mr. Rogers, he hopes he can make a difference in the lives of kids in a similar way--through sharing uplifting music, encouraging imaginative play, offering tools to navigate emotional landscapes, and by reminding each and every person of their inherent value and worth.

There is no cost for the event. Lunch will be offered for an additional $10 To register contact the Parish Office at (631) 427-1752 or [email protected] Deadline to register is Wednesday, January 15th

Talking about God on Sunday's

The church’s core mission is making sense of God’s ongoing work and presence in our lives. Epiphany is the season the church sets aside for looking for and seeing God in all things. In this series in the season of Epiphany, the clergy will explore with parishioners how we see and talk about God in our everyday lives and in the scriptures. Conversations will take place on Sundays between the 8 and 10 AM services at a round table in Bleecker Hall.

Bring a cup of coffee and join us!

Church School Classes Nursery - 0 - PreK1 St. John’s provides care for children through Pre-K1 from 9:50 am to 11:30 am (or to when the 10 am service ends). Our Nursery is staffed by our professional caregiver, Vikki Reres and volunteer parents. Children’s Chapel & Godly Play - PreK2 - 3rd grade Music, prayers, and a Godly Play story follow the same order of service as in the “big church,” all designed to be especially meaningful to young children. To reinforce the Godly Play story, craft and activity time will follow. Elements of Faith - Grades 4 - 6 This group will be using a new curriculum called Shine. Each week it will focus on a different stories of god’s people. It also follows a liturgical model that begins in prayer, moves to scripture, and then engages the children in reflection.