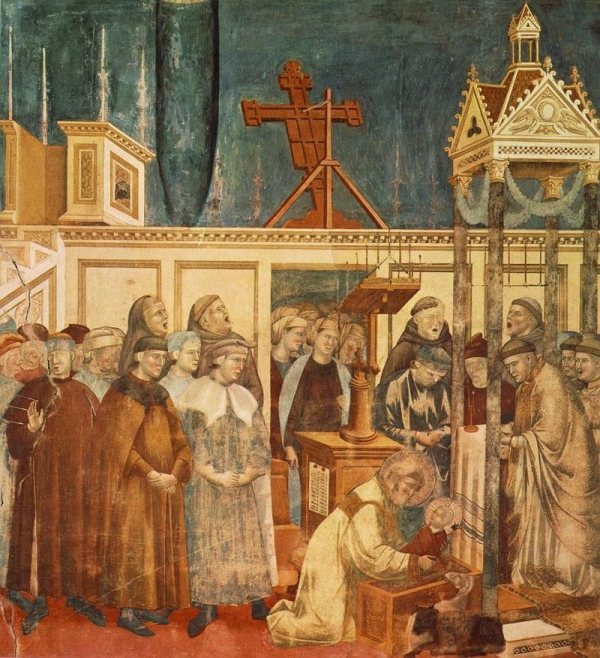 While I was a seminarian studying overseas, I had the opportunity twice to go on a week-long retreat at Greccio which is the location of the first Christmas crèche. I know in my home growing up that we had a Christmas crèche. My siblings and I were always very eager to place the baby Jesus in his proper place. I thought it might be interesting to read a bit about the historical account of the first Christmas Creche!

From The Life of Francis by Thomas of Celano: It happened, three years prior to his death, that he (Francis) decided to celebrate at the town of Greccio the memory of the birth of the Child Jesus with the greatest possible solemnity, in order to arouse devotion. So that this would not be considered a type of novelty, he petitioned for and obtained permission from the Supreme Pontiff. He had a manger prepared, hay carried in and an ox and an ass led to the spot. The brethren are summoned, the people arrive, the forest amplifies with their cries, and that venerable night is rendered brilliant and solemn by a multitude of bright lights and by resonant and harmonious hymns of praise. The man of God stands before the manger, filled with piety, bathed in tears, and overcome with joy. A solemn Mass is celebrated over the manger, with Francis, a Levite of Christ, chanting the Holy Gospel. Then he preaches to the people standing around him about the birth of the poor King, whom, whenever he means to call him, he called in his tender love, the Babe from Bethlehem. A certain virtuous and truthful knight, Sir John of Greccio, who had abandoned worldly military activity out of love of Christ and had become an intimate friend of the man of God, claimed that he saw a beautiful little child asleep in that manger whom the blessed father Francis embraced in both of his arms and seemed to wake it from sleep. Not only does the holiness of the witness make credible the vision of the devout knight, but also the truth it expresses proves its validity and the subsequent miracles confirm it. For Francis's example, when considered by the world, is capable of arousing the hearts of those who are sluggish in the faith of Christ. The hay from the crib was kept by the people and miraculously cured sick animals and drove away different kinds of pestilence. Thus God glorified his servant in every way and demonstrated the efficacy of his holy prayer by the evident signs of wonderful miracles.(1 Cel, 30)

May this rich tradition of welcoming the Christ child live on in our hearts and homes!